Venture funding in February 2021 continued at a strong pace, tracking at just under $35 billion, or an average of $1.7 billion invested on a global basis each working day, according to Crunchbase data.

So far, December 2020, January 2021 and February 2021 have been the three peak funding months of the past two years. February followed a record funding month in January 2021, and came in just shy of December, the next-highest month for global venture funding.

Rounds $100 million and above represented a greater share of investment in the first two months of 2021, at 64 percent — contrasting with 56 percent for all of 2020 and 48 percent in 2019. February 2021 also represents the third-highest month for amounts in these so-called supergiant rounds over the past two years.

Investors minted 22 new unicorn startups in February, down from the unprecedented 38 new billion-dollar startups the month before. The most highly valued of the new February unicorns were London-based cryptocurrency company Blockchain, Seattle-based sales enablement platform Highspot and IoT security company Armis Security, based in Silicon Valley. Tiger Global Management was a lead investor in five of the new unicorn companies.

All told, the Crunchbase Unicorn Board now lists more than 700 companies collectively valued at $2.3 trillion that have raised north of $503 billion. 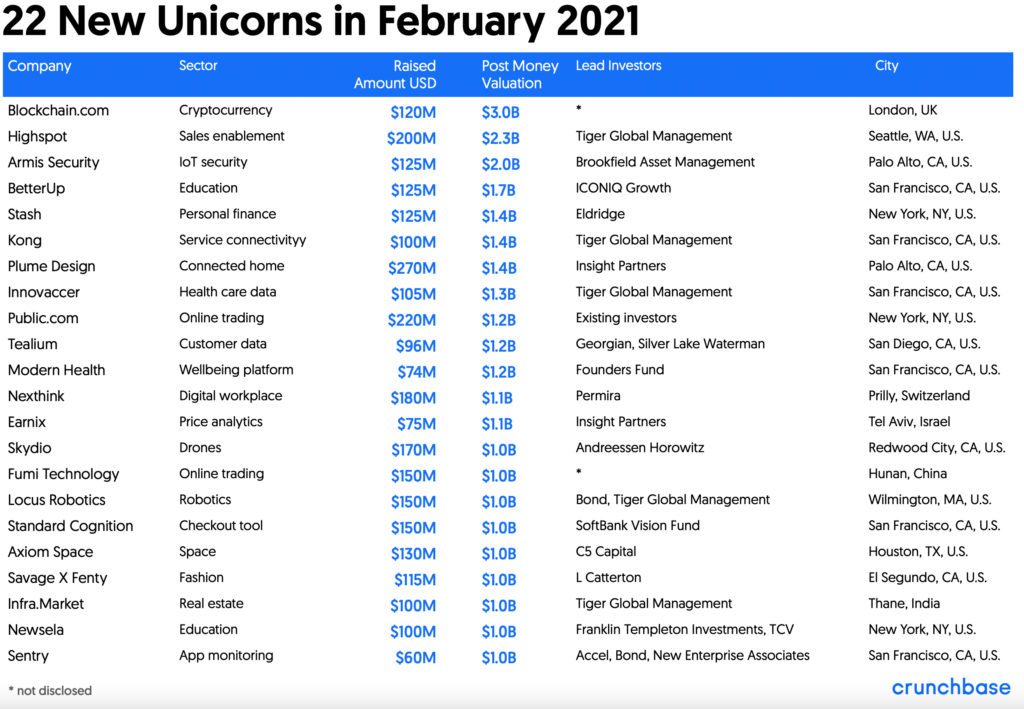 Venture backed M&A activity is up so far in 2021, but well short of monthly exit amount peaks in 2020. Social content platforms that create revenue opportunities for creators led in exits for both M&A and public debuts.

South Korea-based video social platform Hyperconnect was purchased for $1.7 billion by Match Group, the owner of Tinder, Match.com, OkCupid and Hinge, among other dating platforms.
Uber purchased Boston-based alcohol marketplace Drizly for $1.1 billion, showing a renewed focus on delivery with its prior acquisition of food delivery service Postmates and Latin American grocery delivery startup Cornershop.
One not successful exit: Knotel, a flexible workspace company that had raised $560 million since 2016 and was valued at more than a $1 billion, filed for bankruptcy and had its assets acquired by real estate services company Newmark Knight Frank.

The largest tech IPO in February was Kuaishou Technology. The Beijing-based online video platform, which has 305 million daily active users, raised $5.4 billion with its IPO. Austin-based dating app Bumble, with 42 million monthly active users, also went public, raising $2.2 billion in an IPO that valued the company at around $8 billion.

The creator economy is front and center in 2021, one year into the global COVID-19 pandemic. We see that in the IPO markets, dealmaking and even with the rise of new digital currencies centered on creators.

Social commerce leads in Asia, as shown by Kuaishou Technology’s IPO. The short-video social platform went public at a huge valuation of $150 billion. The next largest, per Crunchbase data, was Facebook, which went public in 2012 at a valuation of $104 billion.

The rise of the digital creator economy has also given rise to innovation in payments for artists, as seen with non-fungible tokens (NFTs), or digital assets that can be verified and sold. The tokens have recently become a massive phenomenon, with artists like Grimes and Beeple selling digital art for millions of dollars and Jack Dorsey offering to sell his very first tweet as an NFT.

And with the much-awaited Roblox direct listing coming later this month, there will be many more avenues for digital creators to make money.

Pro tips: Dive into the data

Crunchbase Pro allows users to easily query the dataset. Here are some useful queries used in this report. See the Crunchbase Pro list for February global funding information. Pro users can save the list to their account, filter by location and match it against target customers.

All 2021 unicorn IPOs are listed here.

Funding rounds included in this report are seed, angel, venture, corporate-venture and private-equity rounds in venture-backed companies. This reflects data in Crunchbase as of Feb. 3, 2020.

Please note that all funding values are given in U.S. dollars unless otherwise noted. Crunchbase converts foreign currencies to U.S. dollars at the prevailing spot rate from the date funding rounds, acquisitions, IPOs and other financial events are reported. Even if those events were added to Crunchbase long after the event was announced, foreign currency transactions are converted at the historic spot price.